I know that it is Wordless Wednesday but I feel as if this picture needs a little explanation. You see, we were driving down the freeway and the sign that we saw right before this one said RIGHT lane closed ahead, so all off the traffic was getting into the Left lane. At this point both lanes are still open…. 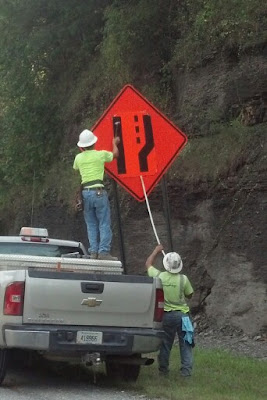 “Down Time” with Tom Brady and Lua — my new favorite commercial

Through years of blogging, I have always enjoyed making fun of writing about Tom Brady. Tom Brady is someone who truly has it all: three Super Bowl rings, movie star good looks, a billionaire supermodel wife, adorable small children, millions from his football contract, endorsements, and really great hair. With the loveable Lua, a dog he rescued from a shelter, he has also been a strong voice for the Pit Bull dog as Family Pet…
The Poodle (and Dog) Blog

For many years canine distemper was one of the most deadly viral diseases affecting dogs. Since the introduction of a vaccine to combat the disease, the incidence of distemper infections has dropped considerably.

Good vaccination practices in the U.S. have played a major role in the reduction of distemper cases in this country, but unfortunately, canine distemper is still a huge problem in other parts of the world.

The wide range of clinical signs accompanying an infection of distemper often makes it very difficult to diagnose a young dog with distemper. In some dogs, a temporary fever and a lack of appetite, sudden lethargy or mild depression, are often the only signs of the onset of distemper. Some dogs infected with the distemper virus may have discharges from the nose and eyes in addition to coughing, a fever, lack of an appetite, vomiting and diarrhea. It is not uncommon for an infected dog to display some but not all of the symptoms associated with canine distemper.

Distemper infections often go undiagnosed when an owner believes the dog just has a cold or some other non-life threatening illness. The unfortunate consequence of misdiagnosing a dog’s distemper symptoms could result in the death of the dog.

Some dogs are able to survive the initial viral infection but later develop neurologic signs in one to two weeks after becoming infected. These signs include seizures, sudden and strange changes in behavior, and constantly walking in circles. Many dogs who develop neurologic signs develop rhythmic motions or twitches. Sometimes an affected dog will act as if it’s chewing on something due to continuous contractions of the head muscles. If a dog is able to survive the initial viral infection and does not display any neurologic damage, it does not mean the dog is completely in the clear. A distemper infection can also lead to retinal damage and discoloration of the dog’s cornea. Sometimes, the dog’s skin, nose and foot pads will become very hard.

There is a period of time that the virus remains dormant after a dog is infected. The clinical signs of distemper will begin to show approximately 10 to 14 days after infection. If a puppy is vaccinated against distemper but has already been infected with the virus, the vaccination will not be effective in preventing the disease.

The follow-up vaccinations provide protection to almost all puppies who receive the vaccine.

Canine distemper virus is found in all the body secretions from an infected animal. Raccoons and skunks are often carriers of this deadly disease, so it’s a good idea to watch your dog carefully when venturing into areas where these animals are often found. Living in the city does not automatically exclude the possibility of an infected raccoon or skunk because these animals love to raid neighborhood garbage cans when foraging for food.

Ask SAM: Flea-like critters are keep coming back
Q: Every morning, my kitchen window is filled with hundreds of really small black bugs that resemble fleas, but are not fleas. They love the lamp and cover it as well. I've sprayed and sprayed, and it kills those on contact; however, hundreds more come …
Read more on Winston-Salem Journal

DIII College Runs the Patented Outside Zone Reverse Flea Flicker 360
D3Football.com named this their play-of-the-week, and I think it may apply to all divisions, because this is quite impressive. Huntingdon (Alabama) Hawks dove deep into their playbook, and called what appears to be an outside zone reverse flea-flicker.
Read more on Eleven Warriors

They say dog is man’s best friend, but when dogs are in trouble, people come to their rescue – pretty inspiring! And, once again, a reminder of the importance of keeping your dog on a leash, especially near water! Until next time, Good day, and good dog!

I do not have Ebola (I think)

Back when it was just a foreign concept whose name was limited to public health journals and the occasional horror movie, my sister and I used to joke about Ebola. Every time we got the flu and felt like garbage we would text each other “Ugh, I have Ebola.” It was shorthand for “I feel very under the weather at the moment.”

But now that it’s finally happened, this snaking into the global population that public health experts have warned of for many years, we stopped joking about having Ebola because now we might ACTUALLY HAVE EBOLA.

I know the risks are low. They are, for now, still very low, and I am grateful for that. But it’s hard not to panic unless you turn off the TV, because all we see are bridal shops being bleached and entire school districts shutting down because someone rode on a plane with someone who might have at one point been symptomatic. My own school district just sent out an email assuring us that they have an Ebola plan in place, and we’re in San Diego, with not an exposed person to be found. Preparation is key, though, so I’m glad they are thinking of it.

I was at the doctor yesterday, for a routine sort of thing, and when they took my temperature the doctor noted it was 99.5.

“Are you feeling sick?” she asked.

“Well, I do have the tiniest bit of a sore throat, now that you mention it,” I said. “I’ve been travelling all week, and you know how that goes. I mean, I lysol that plane seat down and…” My voice trailed off as I noticed her giving me the side eye.

“Oh, thank goodness for that,” she said. “How about West Africa?”

“So you don’t think I have Ebola?” I asked, being serious.

So she gave me a flu shot instead. I had totally forgotten about the flu in the midst of this Ebolademic, to be honest. Fortunately for me, she hadn’t.

As I stood in line at the pharmacy behind an elderly emphysematics on oxygen, a guy picking up Lipitor and a diabetic purchasing insulin, I looked down at her discharge notes: take Vitamin D. Wash your hands. Get some sleep. But just to be safe, and because I want to protect my spin buddies, I decided on a self-imposed quarantine from the gym for the next 24 hours. Can’t be too careful.

From our archives: Best not to chuckle at flea-bitten cities

From our archives: Best not to chuckle at flea-bitten cities
It is an epidemic of fleas. None know whence they come, and they do not go away at all, but stay and drive people crazy. Washington, Philadelphia and New York have had their turn, and now the wicked flea has attacked Boston. The idea of Boston capering …
Read more on SaukValley.com

Flea by the sea a treasure trove for keen bargain hunters
Liz and Siobhan visited their favourite Dublin markets and approached the traders who had good value, appealing stalls that fitted with their vision of a flea market. They also promote up-cyclers and welcome people who are doing genuine house …
Read more on Irish Independent

The Flea at the Evaporator Works features vintage, up-cycled, recycled and …
A variety of cool antiques like this metal cabinet with draws from Michael Rolf Antiques & Ideas (7900 Lorain Ave. Cleveland) are available at The Flea at the Evaporator Works at 51 South Main Street in Hudson this Saturday from 10 a.m to 3 p.m …
Read more on The Plain Dealer – cleveland.com

This post is sponsored by Nutrish. All opinions and statements are entirely our own. Are you planning to enjoy some Halloween fun with your dog? Whether that fun means an afternoon of costumed…