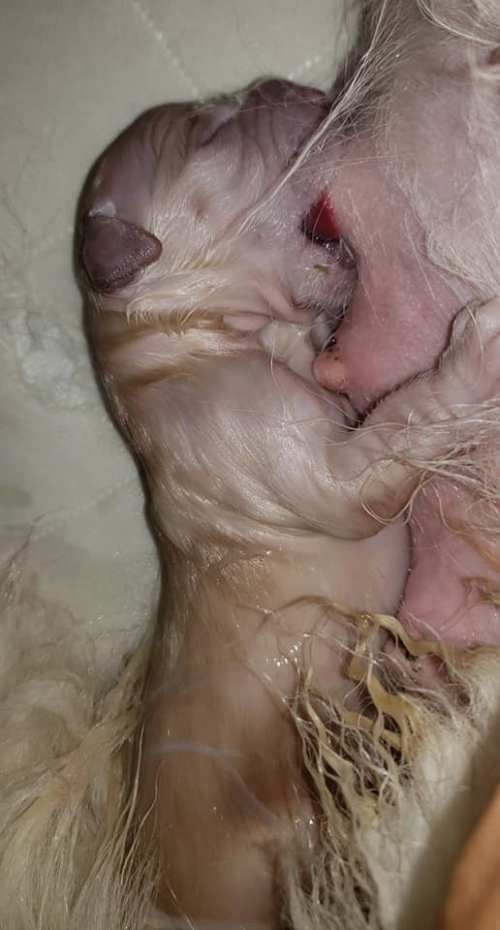 The hours passed on nice summer day. All day the mother dog has panted and stared. Her maiden litter was on its way, and I was there to watch them come.

A sweet little golden retriever, she was too sensitive to push unless she knew her people where there to stroke her ears and tell her what a good girl she is.

As the night drew near, she climbed on the bed between us and then began her long night of pushing and pushing. A wave of contractions would rise from within her, and she would rise in discomfort and turn around. Then she would go prone again against the bed, but the next wave would have her rise, pushing and turning in her primal mammalian dance of parturition.

At one point, her vulva was just inches from my face, and in her pushing, I could see the coming amniotic sack, and then I saw the head of a golden retriever puppy emerge from her body cavity. It was perfection just wrapped in a sheet of biological plastic wrap.

Another push or two, and the bitch screamed as the puppy passed from the prenatal state into the breathing and screaming existence that we call life.

Then the membrane that held him so securely then split away from his face,  and as the oxygen filled his little lungs, he inched over to the milk-filled mammaries and helped himself to a good helping of colostrum.

But he was still connected to his placenta and for what seemed an eternity to me, he was both nursing off his mother and tapping into her blood supply. He was trapped between both states, but one was about to let him go and sink into the other.

He suckled ravenously, and the mother dog expelled the placenta. And thus the first of a litter of seven little puppies entered the world. Through the dark hours of the night, two little girl puppies and four more little boys lurched forward into the great bursting of existence.

And the mother dog shared it with me. She, a beast perfected over the eons to serve mankind, needed us to hold her as she began to force her progeny into the world.

I have never before been privy to such a spectacle. I have no interest in producing a child of my own, and all of my experiences with dogs whelping have been fleeting memories from childhood, where the bitch whelped black crossbreeds in the back of the garage and I hoped that the daddy was a Labrador and not the fierce boxer from up the road. And obvious flattened muzzles exhausted those hopes very quickly.

But to know a dog like this one, one that trusts me enough to share this intimate aspect of her life, is a moving experience. I am better for having been privy to the entire spectacle.

And I am happy. I am content. And I am free.